A Journey With Cerebral Palsy

We traveled to La Grande for the second year. The weekend trip was taken for a golf tournament to help local veterans. Buffalo Peak would be the golf course, situated in the small community of Union, Oregon. Union is about sixteen miles from La Grande, where the brother of my childhood buddy resides. So, my oldest friend and I made the six-hour drive, following his parents. There was more excitement around the trip this year. Becoming familiar with the area last year gave me an idea of what to expect. The golf course was an especially fun track to play, so I was looking forward to becoming reacquainted. It often seems challenging to find courses that truly peak interest, but this one does. Being set into the side of a hill and drifting down into a bowl provided unique holes. We were setup to play as an intact team from last year, taking part in a four-person scramble. Having the same group meant we could measure our performance against the previous year. Last year found us shooting a round of six over par, anything better would be an improvement. But, there was some fun to be had before our nine o’clock start on Saturday morning.

Our first event of the weekend would be riding quads. With the Friday tee time scheduled for three in the afternoon, our morning would be free. Riding quads was on the agenda during the previous year’s trip, but we didn’t have the time. This year sounded like we would be riding. Silly me, I was thinking riding a quad wouldn’t be too challenging. Well, it didn’t turn out to be any walk in the park. Cerebral palsy seemed to play a large role in the challenge of riding. There was many more moving part to the activity than anticipated. The cross-body functionality became the first hurdle. With acceleration being managed with the right thumb and gear shifting responsibilities on the left foot, it was quite the distance for brain signals to travel. The first trail we rode felt pretty technical, with a relatively small width, off balance path, through what seemed a small fallen tree gap, and through a large puddle. It was quite the introduction to riding a quad, surprisingly the quad and I made it. As the day wore on we rode some easier trails, more of the logging road variety. Those trails were wider, providing the opportunity to learn the skills of riding, without the concern of simply staying upright. By the time we ended our day, I was starting to get the hang of shifting, accelerating, and braking on the quad. Even splashing through some of the “optional” puddles along the route. It was a fun experience, definitely challenging CP with all the moving parts of finger and foot dexterity, coordination, and balance. An activity worth trying again. 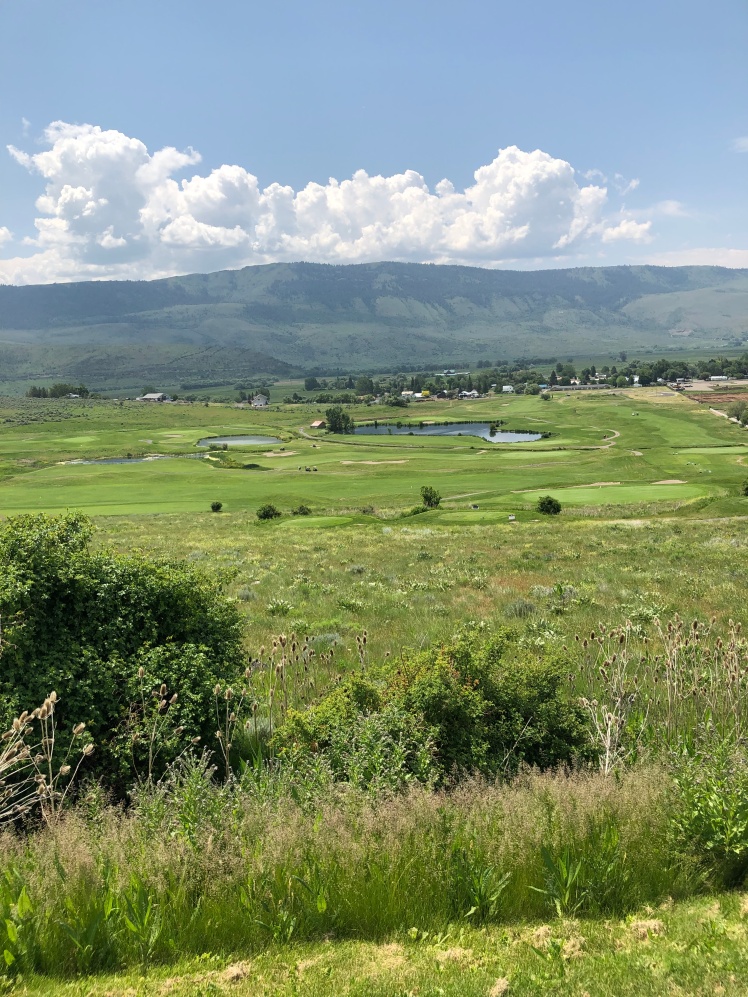 As our quad experience came to a close, we headed back into town. We got cleaned up for our afternoon round of golf, heading to lunch before getting reacquainted with Buffalo Peak. The turkey sandwich rested comfortably in my stomach riding toward Union. Dark clouds gathered over the truck, as we rolled past farmland. The golf clubs found their way from the truck bed to the golf carts, as small claps of thunder rang. Buffalo Peak warned us, we would be playing at our own risk under auditory threats of lighting.  Without the visual of lightning from the golf course grounds, we decided to take our chances. So, we headed out for our evening practice round against a backdrop of the Blue Mountain range. The lightning stayed clear, the once threating found somewhere else more appealing, and we played golf while the sun sank below the hills. One year later, Buffalo Peak Golf Course did not disappoint. The design wound us around the hills, with elevated tee shots, and challenging approaches to elevated greens. The fairways and greens were inviting, while being surrounded by penal rough and bunkering. Because of a tournament earlier in the day and threatening weather, we played the final few holes as the only group. From the elevated eighteenth, I looked across the golf course with the sun sinking in the distance, and couldn’t find another soul. It was one of the coolest scenes I had seen in a while. Wishing it could be captured, slight disappointment arrived upon realizing my phone was left in the room. With the picture captured just in my mind, we finished up our round, and headed to bed. Sleep was beckoning after this day.

Your body feels different when the realization of responsibility lands. Cerebral palsy or not, time has made me a better player. The hard work in the gym, along with chiropractic adjustments make my golf game stronger each year. You become a more valued part of the team and execution starts to carry weight. It has been a new emotion since traveling to play in La Grande. One that has taken some getting used to over the last couple years. We began at nine in the morning, under an ideal blue sky. The shorts would almost be mandatory, along with the forgotten sunscreen. Our first hole was the par-5 second, an elevated tee box, to a fairway carrying us back up to an elevated green. A bogie was the worst score that could be carded on any hole, so if we failed to make par, the ball would be picked up. The score to beat from last year was six over. If we could achieve something lower, our day would be successful. Our opening hole yielded a par. We were off to a good start. As we wound through the first eight holes’ things felt pretty good. Making the “turn” at the clubhouse, we had dropped a couple shots to par, but were on track to better last year. The most challenging holes of the day still awaited our arrival. 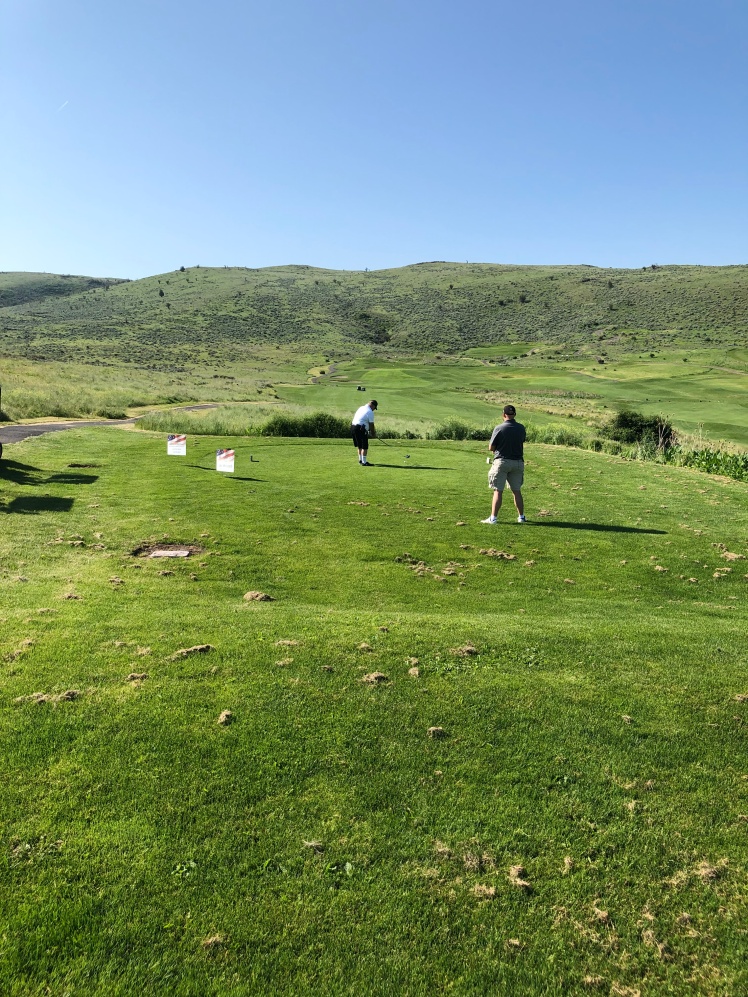 Grabbing some “refreshments” at the clubhouse, we drove up to the elevated tenth teeing ground. We had eleven holes remaining, as our round would finish after playing the first hole, and we needed to play them well. Riding up the hill, it was difficult to remember if the back nine at Buffalo Peak was more challenging. But, I know the difficult sixteenth was lingering out in front. Getting through in less than six over would still be in question. The back nine developed into a teetering situation when our score rose to four over par. However, with the threat of our score rising more, a twenty-foot birdie putt found the base of the cup. The momentum was stabilized and back to three over we went. The most challenging hole still out in our distance. We stood on the sixteenth tee clinging to our three over score. This would be an important hole for the team. A par-5 climbing up the hill from the teeing ground with the final 75-yard elevating drastically. It has been one of the most challenging hole I’ve played. We got off to a good start, with a tee shot splitting the fairway. Our focus honed in, a par here would virtually guarantee an improved score. The great shots continued, every one hit down the middle, we plopped our third onto the elevated surface, and with two putts got out of there with five.

We stood on the seventeenth tee dormy with the six over from the previous year. With just three holes remaining on the card. We couldn’t finish worse than the six over from the previous year. Still, there was more work to be done in order to improve. The final three holes would all be par-4’s, with only the eighteenth posing a threat of adding a stroke. We played the seventeenth well without dropping a shot. On to the eighteenth we went, which plays uphill with a challenging tee shot. We hit one of the best tee shots of the day, setting up the par we were able to make. We went on to complete the first hole with similar ease achieved on the seventeenth. Our scramble tournament was completed by achieving our goals. With four bogies and one birdie, the team carded a three over par round. We shook hands, emptied our pockets into the golf bags, and headed for the truck. On to Safeway we went in preparation for a barbeque, capping off our fun and successful day. The plan will be to challenge that three over score in one year. 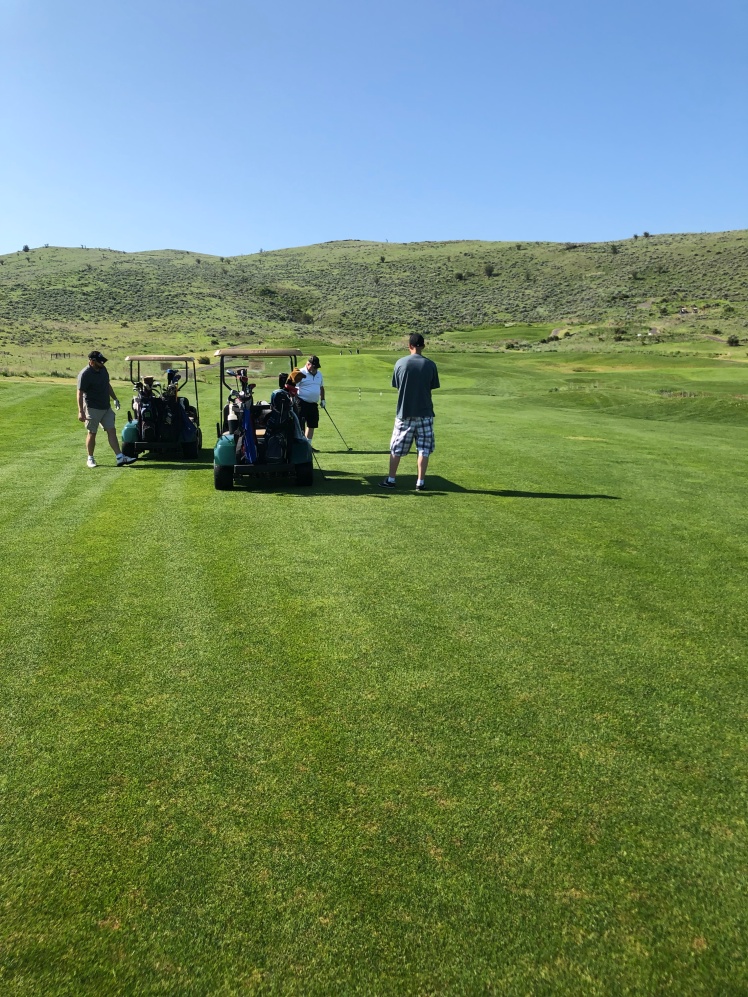 Cerebral palsy can hold us back from taking part in different activities. The disability has the potential of decreasing our ability to feel included. Sometimes it has left me feeling part of a team simply out of pity. Almost just for the shake of inclusion. But, this weekend felt different. For the second year in a row, I felt a part of our scramble team. We relied on some of my golf shots, helping us succeed together. In past scrambles the feeling of “how are we going to use Peter” was felt. Traveling to play at Buffalo Peak provides a different emotion from that one of my youth and it can take some getting used to. The emotion has been one of feeling almost counted on by the other team members. I begin to realize the “new” feelings only come about through years of effort. The effort taking place with a chiropractor, who makes sure my body remains in good position, along with work in the gym with a trainer, who helps build strength, coordination, balance, and stability. The same work that helps me hit the golf ball longer and straighter, also helped me ride a quad last weekend. It was fun to escape the everyday to experience something new and something that was fun the first time. Tradition is meant to be enjoyed, when life only allows short time with lifelong friends. I went back into the gym this week, knowing even with cerebral palsy, I can be stronger and better in one year.